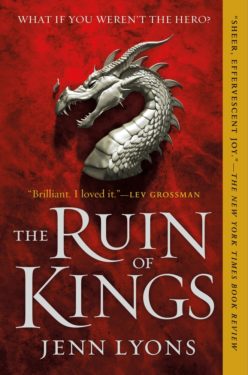 Welcome to Dragon Week 2020, a celebration of all things Dragon!

We are THRILLED to have The Ruin of Kings author Jenn Lyons joins us for Dragon Week 2020! Check out Jenn as she rounds up the best Dragons in human skin—do you agree with her choices? Let us know in the comments!

The Best Dragons in Human Skins

I’ve always loved dragons. This isn’t a secret (nor the first time I’ve gone on about it).

But I can distinctly remember the first time I discovered something even better than dragons: wizards who could change INTO dragons. That has everything. Powerful do-not-mess-with-me magic? Check. Being able to fly while still fitting through the door of one’s favorite restaurants? Check. The potential for some idiot to pick a fight with you only to discover, oh no, DRAGON?

As little girl power fantasies went, this was heady stuff.

For me, that realization came in the form of Maleficent from Sleeping Beauty. It’s kind of amazing how much of a formative effect that movie had on me, and not perhaps in the way Disney had imagined or intended. While I suppose most kids could be assumed to be rooting for the ‘heroes,’ here I was howling with frustration because, seriously, Maleficent, how did you manage to lose to that guy? And who carries an asbestos shield, anyway?

But even though Maleficent disappointed me, my love of a good shape changing dragon has endured. So if I may, I’d like to talk about a few of my favorites. (Warning, sometimes the big reveal that a person can shape change into a dragon or just flat-out is a dragon is a major plot point of these stories, so the rest of this is filled with spoilers.)

1.  Takhisis, from the Dragonlance series by Margaret Weiss and Tracey Hickman.

Tween me thought the Dragonlance series was the best thing ever, and no small part of that was the inclusion of my favorite five-headed dragon queen, Tiamat, Takhisis. As the goddess of evil, Takhisis normally went around as a beautiful woman, but made no real secret of the fact that underneath all of that, she was the mother of dragons. The fact that she was unrepentantly evil didn’t change the fact that she was also completely cool.

2.  Tehanu from The Other Wind by Ursula K. Le Guin

Dragons have an interesting relationship with mankind in the Earthsea books. They are seen as mysterious and powerful, most refusing to have anything to do with humanity with the exception of the rare few dragonlords. It’s only in the last two book of the Earthsea series that it becomes clear that, at least in a few cases, the embryonic form of dragons may not be an egg, but a human.

3.  Red Dorakeen and Leila, from Roadmarks by Roger Zelazny

Another book where dragons start out looking human is Roadmarks, where dragons are also responsible for creating a highway system that moves through all the alternate realities spun off throughout history (trust, it makes sense in the book). In a Merlin-like manner, these proto-dragons age backward, starting out old and decrepit and increasingly growing younger and more self-destructive (arson is a favorite) as they approach the time of their ‘hatching.’

In Seraphina, humans and dragons exist uneasily together, and the titular character, half-dragon, half-human, isn’t supposed to even exist, because dragon/human hybrids are believed to be impossible. Still, there’s a whole lot of dragons running around looking human and it’s widely accepted that one is far more likely to run into a dragon dressed up for a soiree than sitting on a pile of gold.

5.  Borch Three Jackdaws, from The Witcher by Andrzej Sapkowski

While dragons are a known menace hunted down by mankind in the Witcher books, gold dragons, who can shape change into humans, are widely considered a myth. Which is probably exactly how Borch Three Jackdaws, or Villentretenmerth to his draconic friends, likes it. He spends most of his time running around in human form, but when it really matters, isn’t at all reluctant to get his dragon on.

6.  Anamander Rake & Silchas Ruin, from the Malazan Books of the Fallen by Steven Erikson

Yikes, like Anamander Rake (or even worse, his brother Silchas) needed be able to shape change into dragons. And yet, there they are. Both are Soletaken Eleint, meaning, yes, you guessed it, being able to shape change into a dragon because they’ve tasted the blood of the mother of dragons, T’iam. (Nice to see I’m not the only author out there with a Tiamat fixation.)

This is by no means an exhaustive list, but I don’t expect this particular trope to go out of style anytime soon. So the next time you’re tempted to bully some old man at the check out line, just remember they might turn out to be Bahamut (looking at you, Fizban.)

Order Your Copy of The Ruin of Kings:

1 thought on “The Best Dragons in Human Skin: A List by Jenn Lyons, author of The Ruin of Kings”

Looking for some of the most anticipated books of the month? Check out this list from @bustle, featuring #ADesolationCalledPeace by @ArkadyMartine!

Reply on TwitterRetweet on Twitter4Like on Twitter15
Tor Books@torbooks·
6h

Still catching up on your 2020 #TBR? Check out this list of recommendations from @NetGalley, featuring #TheInvisibleLifeofAddieLaRue by @veschwab!

Feeling a new book this month? Check out all the eBook sales Forge has happening in March!