Out of all the wizards you might encounter in your life, the ones you probably want to meet are powerful yet kind guides. Begrudgingly helpful and somewhat strong wizards are also a possibility, yet not as fun. But perhaps the number one wizard to look out for is The Garbage Wizard. This wizard is either entirely unhelpful and there just for vibes – or they could be rancid evil wizards. Take heed if you ever encounter a Garbage Wizard like the one in The Thousand Eyes by A. K. Larkwood, out February, or any of the ones below! Warning, spoilers for The Unspoken Name below.

Belthandros Sethennai from The Thousand Eyes by A. K. Larkwood – Phantom Garbage

In this sequel to The Unspoken Name, two years have passed since Csorwe and Shuthmili have risked a Garbage Wizard Belthandros Sethennai’s anger in order to gain their freedom. But when they release an eldritch power that has slept undisturbed for generations, and they run into the former lover of the wizard they are escaping, they might just discover there are worse threats out there than the Phantom Garbage Wizard they fled.

The Darkling from Shadow and Bone by Leigh Bardugo – Hot Garbage

In the first volume of the Grishaverse (and the basis for the new Netflix series), Alina Starkov is an orphaned soldier who knows she might not survive her first voyage through the Shadow Fold – a swath of unnatural darkness crawling with monsters. But when her ship is attacked, she releases magic she didn’t even know she possessed. Suddenly thrown into a world of glamour over her new powers, she meets the military’s leader and Hot Garbage Wizard, the Darkling. But when Alina discovers a dangerous secret, she’s not sure who she can trust.

Harrow from Harrow the Ninth by Tamsyn Muir – Goth Garbage

The second part of the Locked Tomb series, Harrow the Ninth follows Harrowhark Nonagesimus, the last necromancer of the Ninth House, and truly the Gothest Garbage Wizard to exist. After Harrow is drafted by the Emperor into an unwinnable war along with her detested rival, Harrow has to perfect her skills and become an angel of undeath. But her health is failing, her sword makes her nauseous, and even her mind is threatening to betray her. Is somebody trying to kill her? And if they succeeded, would the universe be better off?

In this collection of the first five books of the Craft Sequence, the Red King is the Recyclable Garbage Wizard that keeps coming back for more. In a world where souls are currency, cities are powered by the fallen gods, necromantic law firms, and warrior priests exist, The Red King and Red King Consolidated continue to insert themselves into where the characters least expect – and perhaps, least want.

The most Insufferable of Garbage Wizards, Kell has the rare ability to travel between parallel Londons; Red, Grey, White, and, once upon a time, Black. Kell works a double life as an ambassador to the Maresh Empire and travels between all Londons, but also as a smuggler, servicing people willing to pay for even the smallest glimpses of a world they’ll never see. When Kell discovers new perilous magic, the once precarious balance of power among the four Londons might just reach its breaking point.

What type of Garbage Wizard is your favorite? Let us know in the comments! 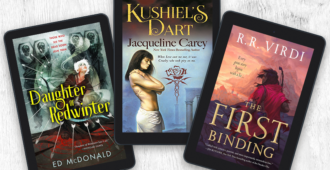 October 14, 2022 No Comments
How Long Our Fav Characters Would Survive… 1 thought on “Magic Users Are The Worst: 5 Examples of Garbage Wizards”