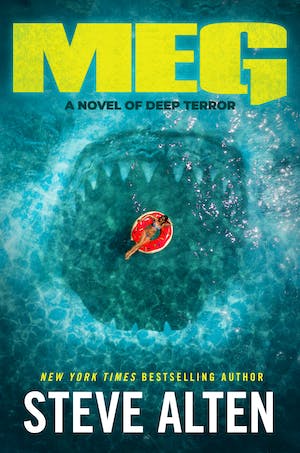 Seven years ago and seven miles below the surface of the Pacific Ocean, Dr. Jonas Taylor encountered something that changed the course of his life. Once a Navy deep-sea submersible pilot, now a marine paleontologist, Taylor is convinced that a remnant population of Carcharodon megalodon—prehistoric sharks growing up to 70 feet long, that subsisted on whales—lurks at the bottom of the Mariana Trench.

Offered the opportunity to return to those crushing depths in search of the Megs, Taylor leaps at the chance…but his quest for scientific knowledge (and personal vindication) becomes a desperate fight for survival, when the most vicious predator the earth has ever known is freed to once again hunt the surface.

MEG: A Novel of Deep Terror will be available on June 21st, 2022. Please enjoy the following excerpt!

The Coast of the Asiamerica- Northern Landmass

From the moment the early morning fog had begun to lift , they sensed they were being watched. Th e herd of Shantungosaurus had been grazing along the misty shoreline all morning. Measuring more than forty feet from their duckbilled heads to the end of their tails, these reptiles, the largest of the hadrosaurs, gorged themselves on the abundant supply of kelp and seaweed that continued to wash up along the shoreline with the incoming tide. Every few moments the gentle giants raised their heads like a herd of nervous deer, listening to the noises of the nearby forest. They watched the dark trees and thick vegetation for movement, ready to run at the first sign of approach.

Across the beach, hidden among the tall trees and thick undergrowth, a pair of red reptilian eyes followed the herd. The Tyrannosaurus rex, largest and most lethal of all terrestrial carnivores, towered twenty- two feet above the forest floor. Saliva oozed from the big male’s mouth; its muscles quivered with adrenaline as it focused on two duckbills venturing out into the shallows, isolating themselves from the herd.

With a blood-curdling roar, the killer crashed through the trees, its eight tons pounding the sand and shaking the earth with every step. The duckbills momentarily froze, then rose on their hind legs and scattered in both directions along the beach.

The two hadrosaurs grazing in the surf saw the carnivore closing in on them, its jaws wide, fangs bared, its bone- chilling trumpet drowning the crash of the surf. Trapped, the pair turned and plunged into deeper water to escape. They strained their long necks forward and began to swim, their legs churning to keep their heads above water.

Driven by hunger, T. rex crashed through the surf after them. Far from buoyant, the killer waded into deeper waters, snapping its jaws at the incoming swells. But as it neared its prey, the T. rex’s clawed feet sank deep into the muddy seafloor, its weight driving it into the mire.

The hadrosaurs paddled in thirty feet of water, safe for the moment. But having escaped one predator, they now faced another.

The six-foot gray dorsal fin rose slowly from the sea, its unseen girth gliding silently across the dinosaurs’ path. If the T. rex was the most terrifying creature ever to walk the Earth, then Carcharodon megalodon was easily lord and master of the sea. Sixty feet from its conical snout to the tip of its half-moon-shaped caudal fin, the shark moved effortlessly through its liquid domain, circling its outmatched prey. It could feel the racing heartbeats of the hadrosaurs and the heavier thumpa, thumpa of the T. rex, its ampullae of Lorenzini—gel-filled sensory pores located beneath its snout—detecting the pounding organs’ electrical impulses. A line of neuro-cells along its flank registered each unique vibration in the water, while its directional nostrils tasted the scent of sweat and urine excreted from its floundering meal-to-be.

The pair of hadrosaurs were paralyzed in fear, their eyes following the unseen creature’s sheer moving mass which circled closer, creating a current of water that lifted and dragged the two reptiles into deeper waters. The sudden change panicked the duckbills—the beasts quickly reversed direction, paddling back toward the beach. They would take their chances with the Tyrannosaurus.

Legs churning water, they moved back into the shallows, feeling the mud swirling beneath their feet. T. rex, in water up to its burly chest, let out a thundering growl, but could not advance, the predator struggling to keep from sinking farther into the soft seafloor.

The duckbills neared the reptile’s snapping jaws, then suddenly broke formation, striding in separate directions, passing within a few harrowing feet of the frustrated hunter. The T. rex lunged, snapping its terrible jaws, howling in rage at its fleeing prey. The duckbills never stopped, bounding through the smaller waves until they staggered onto the beach and collapsed on the warm sand, too exhausted to move.

Still sinking, the Tyrannosaurus had to struggle to keep its huge head even a few feet above water. Insane with rage, it lashed its tail wildly in an attempt to free one of its hind legs. Then, all at once, it stopped and stared out to sea.

From the dark waters, a great dorsal fin was approaching, slicing through the fog.

The T. rex cocked its head and stood perfectly still, instincts telling it that it had wandered into the domain of a superior hunter.

The Tyrannosaurus felt the tug of current caused by thirty tons of circling mass. Its red eyes followed the gray dorsal fin until it finally disappeared beneath the murky waters.

T. rex growled quietly, searching through the haze. Leaning forward, it managed to free one of its thickly muscled hind legs, then quickly freed the other.

On the beach, the hadrosaurs took notice and backed away—as the towering dorsal fin rose again from the mist, this time racing directly for the T. rex.

The reptile roared, accepting the challenge, its jaws snapping in anger.

The wake kept coming, the dorsal fin rising higher . . . higher, while underwater, the unseen assailant’s head rotated slightly, its jaws hyperextending seconds before it slammed into the T. rex’s soft midsection like a freight train striking a disabled SUV.

T. rex slammed backward through the ocean, its breath blasting out of its crushed lungs, an eruption of blood spewing from its open mouth seconds before its head disappeared beneath the waves.

With a whoosh, the dinosaur fought its way back to the surface, its rib cage crushed within the powerful jaws of its still-unseen killer, the T. rex choking on its gushing innards.

And then the fearsome land dweller vanished beneath a swirling pool of scarlet sea.

The hadrosaurs had watched the scene unfold. They waited for their stalker to reappear, their bladders releasing in fear. Long moments passed, the sea remaining silent. The spell of the attack broken, the duckbills abandoned the beach, lumbering toward the trees to rejoin their herd.

An explosion of ocean sent their heads turning as the sixty-foot shark burst from the water, its enormous head and upper torso quivering as it fought to remain suspended above the waves, the broken remains of its prey grasped within its terrible jaws. In an incredible display of raw power, the Meg shook the reptile from side to side, allowing its upper front row of seven-inch serrated teeth to rip through gristle and bone, the action sending swells of pink frothing water in every direction.

No other scavengers approached the Meg as it fed. The predatory fish had no mate to share its kill with, no young to feed. A rogue hunter, territorial by nature, the shark mated out of instinct and killed its young when it could, for the only challenge to its reign came from its own kind. A marvel of nature that had evolved over hundreds of millions of years, it would adapt to and survive the natural catastrophes and climatic changes that caused the mass extinctions of the giant reptiles and countless prehistoric mammals. And while Megalodon’s own numbers would eventually dwindle, some members of its species would manage to survive, isolated from the world of man in the perpetual darkness of the unexplored ocean depths . . .

1 thought on “Excerpt: MEG: A Novel of Deep Terror by Steve Alten”