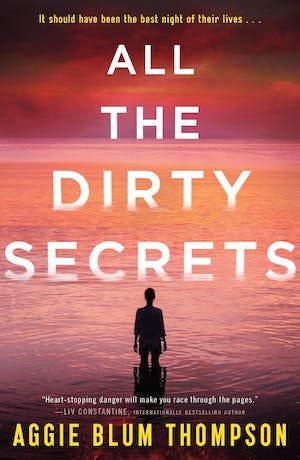 Aggie Blum Thompson’s All the Dirty Secrets is a thrilling tale that asks how far you would go to protect your status and your family…and if some secrets should ever be revealed. And what better way to fully immerse yourself in a gripping book like this one than to have a killer playlist that accompanies it? Read below to see Aggie’s incredible list of 90s bops that’ll have you vibing out, reminiscing about your own teenage angst, and feeling all sorts of nostalgic!

Some decades are more difficult to define than others. You say 1920s, I say roaring. When we think of the 40s, Rosie the riveter and Victory Gardens come to mind. But the 90s? What is unifying about a decade that started with the fall of the Berlin Wall and ended with the overhyped Y2K threat that the entire world was about to implode?

Writing the chapters of All the Dirty Secrets that took place in 1994 thrust me back in time to the last decade that gave us TV shows that were cultural touchpoints – Friends, Seinfeld, The X-Files. To a time when Cable TV news erupted on the scene, crawling its way through our national consciousness with nonstop coverage of events like O.J. Simpson’s white Bronco ride and subsequent trial, of Monica Lewinsky’s blue dress and its implications, of shootouts between the feds and far-right groups at Ruby Ridge and Waco.

The nineties gave us both blockbusters that spawned industries – like Titanic and Jurassic Park — and films showcasing Gen X sarcasm – think Slacker and Clerks. The internet was a just a wee baby and was dominated by AOL. In a world before streaming, Apple Music, or Spotify, a file-sharing giant called Napster allowed strangers to exchange, illegally, songs for free. But my favorite part of writing these chapters was researching the music that rocked the decade. Here is a completely incomplete list of the soundtrack of the 90s.

Click below to order your copy of All the Dirty Secrets, available now!