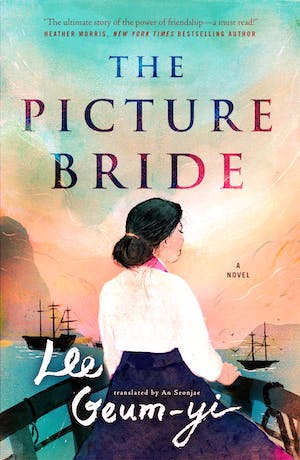 “Your husband is a landowner,” they told her.

“Food and clothing is so plentiful, it grows on trees.”

“You will be able to go to school.”

Of the three lies the matchmaker told Willow before she left home as a picture bride in 1918, the third hurt the most. Never one to be deterred, Willow does all that she can to make the best of her unexpected circumstance. But it isn’t long before her dreams for this new life are shattered, first by a husband who never wanted to marry her in the first place, and then by the escalation of the Korean independence movements, unified in goal, but divergent in action, which threaten to split the Hawaiian Korean community and divide Willow’s family and friends.

Braving the rough waters of these tumultuous years, Willow forges ahead, creating new dreams through her own blood, sweat, and tears; working tirelessly toward a better life for her family and loved ones.

Read onwards to check out the poignant letter written by The Picture Bride author Lee Geum-yi!

In the early 1900s, around 7,000 Korean men left for Hawaii sugarcane plantations and became immigrant laborers. The women who got engaged to these Korean men after exchanging photographs were called picture brides. From 1910, when Korea became a Japanese colony, through 1924, when the American immigration laws banned further Korean immigration into the country, approximately 1,000 Korean picture brides bet their destiny and left home, each with a single photograph of her groom-to-be.

A hundred years ago, when Korean women were not even allowed to go outside of their own village, these picture brides were quite the adventurers and pioneers, having embarked on such a life-changing journey. I was overtaken with a desire to bring attention to these women, and showcase their unique narratives—beyond the vague history that they’ve been given. I wanted to show that these picture brides were individuals—as different as can be from each other—with dreams and desires, not just accessories to the male narrative.

The Picture Bride follows the journeys of three young women: Willow, who comes from a family of Korean independence activists; Hongju, whose husband died two months into marriage; and Songhwa, who was ridiculed—and occasionally stoned—by the children in her village, just for being a shaman’s granddaughter. Unfortunately, the social standing of these three women, who left their country and families with dreams of a new world, doesn’t change much in Hawaii. They lead harsh lives as immigrants—both Asian and female—which is to say, they were outsiders. They always felt in-between two worlds, marginalized. But despite their hardships, they help each other throughout the many hurdles that lie ahead, in admirable solidarity. The Picture Bride is not a story of these women’s success by any means, but of the trails they blazed, struggling to pave the way for future generations, step after challenging step.

Although they left their colonized motherland, their new home of Hawaii was also a colonized territory. The colonized and the colonizers still live together on the soil of America today. And that’s the cultural backdrop against which the women of The Picture Bride had started their new life—once again as outsiders, even though they were no longer part of their colonized motherland. Stories of these three immigrant women, I believe, will deeply resonate with American readers today. Amidst this unrelenting pandemic, we’re awash not just with the virus itself but with discordance, bias, and hate. Never has there been a time more in need of philanthropy and sobriety. I hope this story of three picture brides, written by a Korean woman writer, will contribute to enriching and diversifying the bookshelves in English-speaking countries in this time of much emergency.

Click below to pre-order your copy of The Picture Bride, coming October 11th, 2022!

1 thought on “Letter by Lee Geum-yi, Author of The Picture Bride”