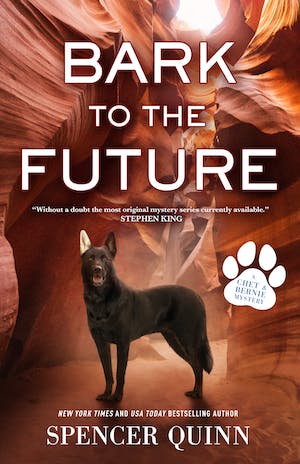 Spencer Quinn’s Bark to the Future continues the adventurous New York Times and USA Today bestselling series that Stephen King calls “without a doubt the most original mystery series currently available.” Chet the dog, “the most lovable narrator in all of crime fiction” (Boston Globe) is the best partner to fight against crime.

Read below to see Spencer’s take on what makes a dog the perfect companion!

The topic for today’s post is: What makes a dog the perfect companion? I thought for a while about this and suddenly realized: that’s what the Chet and Bernie series is all about! So I could either write a little essay using the analytical part of my mind, OR, I could find a passage that came from the imaginative part of my mind that distills the answer to the perfect dog question down to its essence. Since the imaginative part of my mind is what puts bread on the table, let’s open door #2. Here’s a very short partial scene from Bark To The Future, where Chet (the dog) and Bernie (the detective) pay their first visit to the slot canyon you will see on the book cover. Chet (not a talking dog!) narrates:

We rounded a corner, a twisted sort of corner with the walls twisted now, too, mostly reddish but marked with shadowy caves here and there. Two light beams from high above shone down and met on the trail right in front of me. My paws tingled.

“I came here with my dad,” Bernie said.

Whoa! His dad? This was a first.

“Not long before the stroke, so I must have been seven, maybe eight,” Bernie went on. “That day was the only time he ever gave me advice. Maybe there would have been others in a different scenario, maybe not.” He was silent for a bit and then went on. “I used to think it was hiking advice but lately I’ve wondered if he had something more general in mind.”

Bernie picked up a stone and flung it high in the air, with that easy flowing motion of his. The stone passed through both light beams – shining, darkening, shining, darkening – and disappeared into a cave way up on the far wall.

“My dad said ‘always piss downwind and downhill and you won’t go wrong.’”

I was stunned. Downhill and downwind. Had I ever come across more useful advice? It was more than enough to think about forever. Bernie’s dad said it? When was I going to meet him? I couldn’t wait.

Click below to order your copy of Bark to the Future, available now!