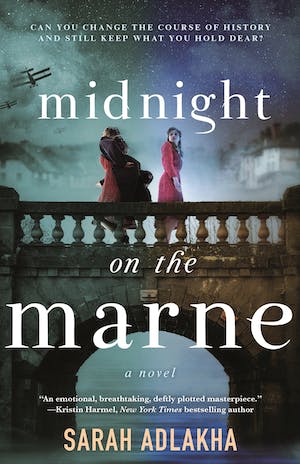 While it’s true that summer is beginning to wind down and fall is right around the corner, we’ve still got some hot new Forge reads to carry you right into the coolness of pumpkin spice season. Picture it now: The scene? France during WWI. The storyline? Gripping. The exploration of what it means to change the course of fate? Breathtaking. And the love the characters have for one another? It transcends time. If these captivating details have you wanting more, we’ve got you covered! Midnight on the Marne is the perfect pick for your next book club discussion. Here’s a breakdown on what to watch, what to drink, what to eat, what to listen to, and what to discuss while you read it!

In a similar vein to Midnight on the Marne, the Prime series The Man in the High Castle takes a look at what the world might look like had the outcome of World War II been different. We think this would be a fitting watch and could easily drum up some interesting conversation in your book club about the similarities between the parallel universe where Nazi Germany and the Empire of Japan reign supreme after their World War II victory in The Man in the High Castle versus the reverberations of an altered timeline during World War I depicted in Midnight on the Marne.

If you’d like more suggestions on what to watch, check out Sarah’s list of her Top 5 Alternative Timeline/Time Travel Books, Movies, and TV Series!

Marcelle and her family live in an apartment across the street from a wine cellar. So what better drink to pair with this book than your favorite glass of wine? Your wine of choice will be the perfect fit. To really help set the scene, you can choose a French brand. Santé!

There’s a moment in the book when Marcelle is watching the receptionist at the Occupation Administration Office while she waits to have a talk with Max Neumann. As she sits, the receptionist receives a box of assorted chocolates from a German soldier. Marcelle reflects on how difficult her life has been in the past five years and that she hasn’t had one bite of chocolate in all that time. We think chocolate would be a good snack to pair with this book–as a reminder that even when circumstances are rough, there are still some sweet things in life to help you fight through the hard days.

What to Listen to:

Since the setting is France, we suggest you throw on some classic French jams. Let your Alexa croon songs like “Tous les garçons et les filles” and “La Vie En Rose” from the corner as you sip your wine, eat your chocolates, and contemplate philosophical theories like the repercussions of changing fate and the question of “what if?” that lingers when you think of how different things would look if you had the ability to alter the timeline of your own life–you know, just a few casual themes that’ll present themselves as you read Midnight on the Marne. We think heavy food for thought requires some soft French music vibes!

Download the Midnight on the Marne Reading Group Guide for insightful questions to get the discussion going!


Click below to order your copy of Midnight on the Marne, available now!

1 thought on “Forge Your Own Book Club: Midnight on the Marne by Sarah Adlakha”