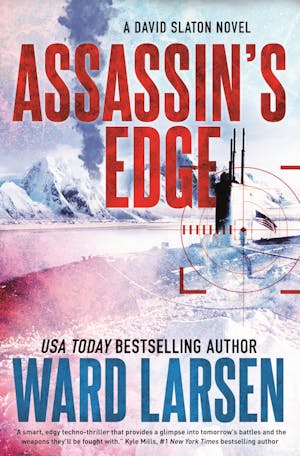 Assassin’s Edge will be available on April 14th, 2022. Please enjoy the following excerpt!

Raven 44 cut smoothly through thin air, floating effortlessly in one of the earth’s most hostile environments: the lonely sky above seventy degrees north latitude. As the big RC-135 skirted the northern border of Russia, the air outside registered sixty degrees below zero. At that temperature water goes instantly to ice, and fuel in the wings must be constantly heated. The jet’s cabin, of course, was warm and dry, aeronautical engineers having long ago conquered such environmental adversities.

Other threats, however, were far less foreseeable.

“I’ve got an intermittent strobe bearing three-four-zero,” announced Staff Sergeant Kyle Trask over the intercom. He was one of seven airborne systems operators manning workstations in the airplane’s tunnel-like cabin.

“From the north, not landside?” asked Major Tom Meadows, the mission commander who oversaw the sensor suites. “North,” confirmed Trask. “Looks like it’s coming from 401. Really high power, broad spectrum, comes and goes . . . haven’t seen anything like it before.”

The major rose from his own console, fighting stiffness from the long mission, and went to stand behind Trask. He studied the sergeant’s display, which was a composite map of the surrounding area: a terrain relief of glacial coastline that hadn’t changed in a million years, overlaid by airspace boundaries that hadn’t existed when his grandfather was born. To Raven 44’s left was the northern coast of Russia, the ice-rimmed frontier where the wilderness of Siberia met the Arctic Ocean. On the starboard side there were no land masses whatsoever, only sea and ice all the way to the North Pole. Thirty miles ahead, however, Meadows saw dashed lines representing restricted-use airspace. Aptly named Danger Area 401, it was a twelve-hundred-mile-long corridor that encompassed all the airspace from the sea’s surface to outer space. DA 401 was used, on rare occasions, by the Russian military to conduct missile tests.

“Is it hot now?” Meadows asked.

“This is the first time I’ve seen it go live.”

“I have a couple of times,” Trask replied, “but it’s pretty unusual.” He had been running the northern surveillance tracks longer than Meadows.

DA 401 was exceptionally large, stretching hundreds of miles out to sea, and so it was rarely activated—doing so impinged on highly lucrative commercial airline overflights. Yet both men knew an advisory had been issued days earlier announcing its impending use. Indeed, this was probably why their mission had been moved up twelve hours: headquarters wanted to see what the Russians were up to.

Raven 44 was an RC-135W, a highly modified version of the venerable KC-135 tanker. The type had been in service with the Air Force since the dawn of the Cold War, and this particular jet had rolled off the production line in 1964—making it twenty years older than its oldest crewmember. Yet if the airframe was dated, its instrumentation was not. The jet had undergone extensive modifications ten years earlier to become the cutting edge platform known as Rivet Joint, and now the adopted child of the defunct Strategic Air Command was lurking along the borders of the old Soviet Union much as it always had.

Rivet Joint aircraft had a very specific mission: they trolled along the edges of hostile airspace—places like Russia, China, North Korea, and Iran—in the hope of capturing scraps of electronic intelligence, or ELINT. Radar emissions, telemetry data, communications intercepts. All were fair game, collected passively and recorded for later analysis. It wasn’t as swashbuckling as dogfighting in fifth generation fighters, but in the bigger scheme of things the mission was no less vital to national security. And the intelligence gleaned made the F-22s and F-35s that much more lethal.

The crew was weary. It had been four hours since the last aerial refueling, twelve since they’d taken off from their home drome: Kadena Air Base in Japan. Long missions were typical for Rivet Joints, augmented crews standard. The coffeepots got a workout, as did the bunks in the rest area. Even so, with the crew nearing its second shift change, everyone was in circadian arrhythmia, their senses dull and caffeine no longer bridging the gap.

“What spectrum are we talking about?” Meadows asked, trying to ID the raw-data signal.

“S-band, roughly three gigahertz, but it’s not in the library. Looks like they’re painting us, although that’s not unusual.”

Meadows weighed how to handle it, and only one thing came to mind. He flicked a switch on his intercom and called the flight deck.

The chime on the intercom didn’t exactly wake the aircraft commander, but it recaptured his thoughts, which had drifted to the barbeque he’d been planning for the weekend. Captain Bryan Crossfield tapped a switch to make the connection. “What’s up?”

“Hey, Bryan,” Meadows said from in back. “We’re coming up on Area 401. Just wanted to make sure you were planning on staying clear?”

“Yeah, this course should keep us a good ten miles south of the active sector. Why?”

“We’re getting some solid S-band from one o’clock. The library doesn’t recognize the signal.”

“Okay, thanks for the heads-up. We’ll stay clear.” Crossfield flicked off the intercom and addressed his copilot. “Sounds like they’re testing a new one.”

“Guess that’s why we’re here,” said Lieutenant Rico Huerta as he gazed out the window on the right.

“How far to the end of our track?”

“Let’s extend it.” This was standard procedure. The Rivet Joint airframe was not ambidextrous—if they turned back east, the twenty-footlong side-scan antenna on her starboard hip would no longer have a view of the test range. Unknown signals were always worth watching.

“We can’t go more than about forty extra miles,” said Huerta. “We’re due at the last refueling track in less than an hour, and that’s three hundred miles behind us.”

“Fair enough. Let’s just give them what we can so that—” Crossfield’s words cut off abruptly.

“What?” the copilot asked, sensing his skipper’s unease.

“Did you feel that?”

This time there was no mistaking it. Crossfield’s hands instinctively seized the control column as the great airplane shuddered. Amber warnings lit on the main display, and then the ominous vibration seemed to stop.

“Fault on the weather radar and Sat-Com 2,” said Huerta.

“That’s the least of our worries. Maybe we picked up some ice on the engine fan blades when—”

A great crack stunned both pilots, and in a flash the side window near Huerta’s shoulder spider-webbed, then failed. The decompression was explosive, rocking the airplane from nose to tail. All hell broke loose on the flight deck; the humid inside air crystallized to an icy fog, and papers and Styrofoam coffee cups flew through the breach. The cabin altitude, which had been at eight thousand feet, spiked to thirty-five thousand in seconds.

“Masks!” Crossfield shouted, reaching for his oxygen. He donned his O2 mask amid a riot of audible warnings and red lights. The autopilot kicked off, and the airplane began rolling into a dive—not a bad thing given their situation. “We need to get down to ten thousand feet!” he yelled as he pushed the control column forward.

The noise was overwhelming, and having removed his headset to put the oxygen mask on, Crossfield couldn’t hear the intercom. What he did hear was shouting from the cabin behind. He glanced right and to his horror saw his copilot rag-dolling against the failed side window. There was blood on his face and he was clearly unconscious.

Crossfield shouted for help, but doubted anyone in back could hear him. He began running through the procedure for an emergency descent—a maximum speed dive to a lower altitude where supplemental oxygen would no longer be needed. With the nose continuing to drop, he tried to right the airplane, but found the controls sluggish. In the back of his mind he recalled one exception to the emergency descent procedure: if structural damage was suspected, a high-speed dive was ruled out.

Another great shudder from the airplane, like nothing he’d ever experienced. The jet seemed disconnected from his inputs, like a train no longer on the tracks. He fought the yoke desperately as the nose continued to bury. Rolling past ninety degrees—one wing pointed at the sea, the other toward the sky—the airspeed neared the redline. Just like that, the depressurization emergency became secondary to what was always priority one: maintain aircraft control.

Crossfield hit the stops on the control column, but the airplane kept rolling. Approaching an inverted attitude, but still flying, the airplane emitted a terrible groan. The controls went suddenly light in his grasp, as if the great beast was hesitating. In a near vertical dive now, the windscreen filled with sea—still miles away, but closing in fast. Crossfield’s instincts told him—rightly, as it turned out—that the jet had suffered damage.

The airspeed was approaching Mach 1—never a good place to be in a sixty-year-old airframe that wasn’t designed to go supersonic. For a moment his inputs seemed to find purchase, the flight controls beginning to respond. Then a second explosion, more disastrous than the first, sent everything tumbling. Crossfield was thrown to the left, his lap belt the only thing keeping him from slamming against the side window. Whatever had happened, he knew it was catastrophic. They were screwed, falling out of the sky a thousand miles from nowhere. Amid the Christmas tree of warning lights on the panels in front of him, he picked out the hydraulic pressure gauges. All were pegged to zero. It meant he had no flight controls, along with a damaged airframe and an incapacitated copilot. With g-forces pinballing him around the cockpit, Crossfield did the only thing he could do—he kept fighting the listless controls and prayed for an idea . . . any idea.

Despite all his training, all his years of experience, nothing came to mind as the ice-clad Arctic Ocean filled the front windscreen.