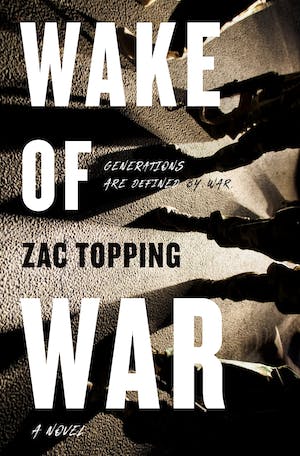 “I just hope I’m on the right side of history.”

The United States of America is a crumbling republic. With the value of the dollar imploding, the government floundering, and national outrage and resentment growing by the hour, a rebellion has caught fire. The Revolutionary Front, led by Joseph Graham, has taken control of Salt Lake City.

In a nation where opportunity is sequestered behind the gilded doors of the rich and powerful, joining the Army seemed like James Trent’s best option. He just never thought he’d see combat. Now Trent finds himself on the front lines fighting for something he doesn’t even know if he believes in. Destroying innocent lives wasn’t what he signed on for, and he can feel himself slipping away with every casualty.

Sharpshooter Sam Cross was just fourteen when American soldiers gunned down her parents and forced her brother into conscription. Now, five years later, retribution feels like her only option to stitch the wound of her past. She has accepted Joseph Graham’s offer to be his secret weapon. His Reaper in the Valley. But retribution always comes at a cost.

When forces clash in Salt Lake City, alliances will be shattered, resolve will be tested, and when the dust clears nobody will be able to lie to themselves, or be lied to, again.

Read below to see what inspired Zac to write his debut novel, Wake of War—a timely account of the lengths those with power will go to preserve it, and the determination of those they exploit to destroy everything in the name of freedom anew.

Inspiration is a funny thing. Sometimes it hits like a lightning bolt, sudden, intense, undeniable. Sometimes (more often than not, honestly) it’s like an elusive cryptid that you only catch a fleeting glimpse of, and by the time you get to your computer to put words to page…there’s nothing there anymore.

I’d say, though, inspiration is usually a mix of both. An idea may bloom suddenly, but it’s most likely been growing for a while, hidden beneath the surface feeding on all the experiences and data we absorb throughout our lives. We love, laugh, cry. Watch, listen, learn. We rage, and we vent, and we wonder how things came to be, and how they might be different. Then a simple detail, a single thought, or a random word sparks an entire idea.

That’s how I discovered the idea for my upcoming debut, Wake of War, a near-future military thriller about a second American civil war and the terrible trials faced by those who fight in it. The concept for the book was part real-world experience, part observation, and a good amount of reflection. But beyond my own experiences as a US Army soldier during the early years of the war in Iraq, there were also a number of other external influences that helped shape the story that would become Wake of War.

First, let’s go back a bit to the HBO miniseries, Generation Kill, from 2008, based on the book by Evan Wright (published in 2004) about the actual accounts of the Marines of the 1st Reconnaissance Battalion during their initial push into Iraq in 2003. This show is hands-down the most realistic depiction of the war in that place at that time that I have ever seen. Everything from the gear, the dialogue, the sets and location, right down to the depiction of the infuriating logistics that govern any kind of military maneuver, it’s all spot-on. The show doesn’t shy away from the tough parts and it captures that chaos of combat in such shocking detail that it might be hard for some to watch. It’s rough, it’s abrasive, and it’s honest. That honesty is what makes this stand out, and I wanted to bring that same level of honesty to my own writing.

Beyond the military genre, I’m also fascinated by near-future stories grounded in reality, and Richard K. Morgan’s 2004 novel, Market Forces, is just that. The book follows a young associate of an investment firm that funds small wars around the globe in exchange for a sizable share of the host nation’s gross domestic product. Employees of these investment firms don’t move up the corporate ladder by promotion, rather they duel to the death in up-armored vehicles on city streets. It’s American Psycho meets Mad Max. Pretty much every character is a train wreck, but it’s fascinating to watch them tear through their world and spiral out of control until every last shred of their humanity has been burned away. Now, that may not be everyone’s cup of tea, but I love a good cautionary tale—especially when it’s written in such a distinct style like Morgan is known for. The story takes place in the not-too-distant future and although some of the elements are far-fetched, the majority of this book is based on real life and the kinds of terrible things that happen every day around the world. Like I said, it’s a cautionary tale. It’s supposed to hurt. Because that pain forces us to reconcile some of our own true-to-life issues that might need to be addressed sooner rather than later. If you’ve read the blurb for Wake of War, I think it goes without saying that it is absolutely a cautionary tale as well.

I’m a very visual writer and I find a lot of inspiration from film and TV, especially of the compelling and thought-provoking variety. The Netflix documentary, Winter on Fire, about the 2013-2014 riots in Ukraine and the country’s struggle to move out from under Russia’s control is a must watch. It’s heartbreaking to see how hard the Ukrainian people fought for freedom and to see where they are now, but it’s important to not look away or put it out of our minds. The documentary captures the terrifying speed in which stability can give way to chaos and violence. And it was while watching this that I wondered if it could ever happen here in the United States, and just what it might look like if it did.

The other film that I recommend to absolutely everyone I can is Waltz with Bashir, a 2008 documentary about director Ari Folman’s search for his lost memory of his time serving in the 1982 Lebanon War. It’s filmed in a rotoscope-type animated style that plays with the concept of the distortion of memory and the lengths the human mind will go to preserve itself. I will warn you, this film has one of the most brutal endings I’ve ever seen, but it is incredibly powerful. Like, take your breath away and leave you speechless. But no other film has ever moved me as much as Waltz with Bashir. If you are inclined to check out any of these recommendations, make it this one.

This last one isn’t a movie, or a TV show, or a book. It’s a spoken word poem by Kae Tempest called Ballad of a Hero about a young child watching their father go off to war and return home broken. I first heard this one recited live at a public reading and it was captivating. Tempest’s lyrical style and heartfelt commentary makes this yet another hard-hitting important piece of work that plays with irony and all the familiar themes of the consequences of military service during times of war.

Now I know this has been a long list of heavy material, but it’s important to reflect and make sure we’re not just repeating the same mistakes that’ve already resulted in so much damage. Sometimes it’s easy to ignore hard truths when we can change the channel or look away, but in order to move forward, in order to heal we need to remember where we came from, and where we have yet to go. The shape of that future is up to us. 1 thought on “Inspiration for Wake of War by Zac Topping”